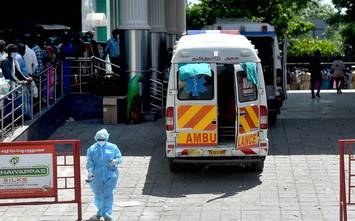 Maharashtra, which is the worst affected State in India, on Tuesday added 28,348 new cases, Kerala 31,337 and Karnataka 30,309, according to Covid19india.org, a volunteer-driven crowdsourced site tracking the coronavirus in India.

Among the States under discussion, the Test Positivity Ratio (TPR) in Tamil Nadu was the lowest at 6.5 per cent while it was 17.2 per cent in Maharashtra, 8.1 per cent in Karnataka and 12.1 per cent in Kerala.

Similarly, active cases in Tamil Nadu were the lowest at 2.42 lakh while in Maharashtra it was 4.19 lakh, Karnataka 5.75 lakh and Kerala 3.47 lakh, the data said.

Tamil Nadu’s overall new cases have flattened at 33,000 for the last four days. This is mainly because Chennai numbers are reducing even as other districts showed an increase, said Vijayanand, a Covid data analyst, in a tweet.

TN government to take a call on Chinese vaccine later

In the last few days, the Tamil Nadu government has been testing around 1.50 lakh persons. However, this needs to be ramped up further, say health experts.

Testing is important to stop the spread of Covid-19 and all districts with test positivity above 10 per cent need scaling of testing. Everyone with Covid-like symptoms and contacts of positives must be offered testing, said Pradhdeep Kaur, ICMR scientist, in a tweet.

Although Chennai has one-tenth of the population, 15-20 per cent of all Covid-19 tests in Tamil Nadu are done in Chennai. Testing may be increased in districts with high test positivity and rapid rise of cases. Missed clusters lead to continuous spread and overwhelmed hospitals, she tweeted.

Tamil Nadu has intensified lockdown restrictions especially in Chennai — the hub of coronavirus in Tamil Nadu — from Tuesday. In the city, people cannot move freely from one police station limit to another. They should have e-registration to do so in the permitted hours.