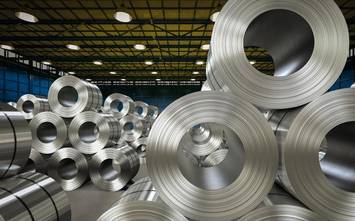 The stock of Jindal Steel & Power (JSPL) has risen more than sixfold since its lows in April 2020. The buoyancy in the stock performance was in line with other steel stocks on account of favourable global conditions resulting from capacity cut by Chinese steel plants, increasing demand for the metal globally and domestically, and loose monetary policy measures across the globe that are expected to increase the infrastructure spending.

JSPL reported highest ever consolidated profit (from continuing operations) in the FY21 of ₹5,527 crore, as against the loss of about ₹574 crore in the previous year. In fact, the company posted positive net profits after six years of losses. FY21 also marked a year of earning highest ever consolidated EBITDA of ₹14,444 crore, more than double compared to the previous year.

With expected infra spending by the government to kick in growth in the economy, the domestic demand for steel is expected to be decent going ahead. Further, China government’s recent announcement to cut the export rebates on 126 steel products will be favourable for Indian steel players to cater to the demand in the export market. With JSPL’s expansion plans to increase the installed steel producing capacity of the company at Angul from about six million tonne (mt) now to 12 mt by FY25 –– that would be operationalised in a phased manner ––the company is well-placed to cater to the expected growth in steel demand. Further, focus of the management on steel production in India by Oman business stake sale closure and proposed divestment of the power segment and to plns to deleverage are positives for the company.

At current levels of ₹396 the stock appears to be priced at discount to its major peers in the industry. The EV/EBITDA of the company at 4.1 times its FY23 estimated earnings (Bloomberg Consensus), is lower than the 6.6 times and 4.8 times recorded for JSW Steel and Tata Steel respectively.

Hence, investors with a three- to five-year horizon can hold on to the stock.

Jindal Steel & Power, in April, said it will sell its 96.42 per cent stake in electricity-generation subsidiary Jindal Power Ltd to one of the promoters of the company, Worldone Private Ltd.

The deal comprises an all-cash offer of ₹3,015 crores for 96.42 per cent stake in Jindal Power, including 3.4GW coal-fired power capacity in Chhattisgarh.

The objective for the deal is to reduce the debt, focus on its India Steel business and significantly reduce its carbon footprint by almost half as part of its ESG objectives.

The power segment, which is to be divested by the company, in FY21 generated about 11.8 per cent of revenue (against 12.3 per cent in FY20), but contributed only 9.12 per cent to the company’s operating profits (EBIDTA) (18 per cent in FY20). Despite positive operating profit, the segment net loss increased in FY21 at ₹1,258 crore as against loss of ₹229 crore in FY20 dragging down the consolidated profit of JSPL.

At the current valuation, the deal seems to be under-valued considering that the power sector is expected to grow with the government’s focus to aid the ailing discoms.

With shareholder’s raising concerns over the valuation and the nuances of the deal, the company deferred the company’s AGM wherein it was going to decide on the divestment of its power subsidiary. The new date has not been announced yet.

Having said that, once the divestment takes place at an appropriate price, the deal would be positive for the company as it would divert the focus of the business wholly on to steel, which is lucrative.

The turnaround witnessed in the company’s performance in the last few years has been impressive after it had a jolt in 2014 in which the Supreme Court cancelled its coal blocks with an additional levy of ₹3,500 crore. The huge debt burden and following moderation in the steel cycle dented operational performance of the company severely till FY18.

Currently, as far as the business performance is considered, JSPL seems promising with expansion plans and deleveraging measures.The company has announced an ₹18000 crore towards capex to expand its total steel capacity by 85 percent to 15.9 mtpa by FY25 (about 8.6 mtpa in FY22).

While the prospects of the steel sector looks decent in terms of demand for the metal, current higer steel prices is a point of concern.The more than 75 per cent jump in last one year to ₹65,250 per tonne of hot rolled coil is expected to have stabilise/downside from hereon, as prices at these levels are not expected to be sustainable.As per a report from ICICI Securities, the current spreads for US HRC (hot rolled coil) steel is at $965 — a 70-year high after adjusting for inflation. The key risk to commodity/metal prices would be the premature exit of easy monetary policies due to the inflation concerns, which may get further fuelled by persistent high commodity prices. Also, China cabinet’s recent negative stance on the rising commodity prices may likley act as a headwind to steel prices going ahead. .

Further, JSPL’s exhaustion of Sarda iron ore inventory may warrant the company to purchase the raw material from the open market, and may exert some pressure on the current level of margins.

With strong operating performance in FY21, the company reduced its net debt by whopping ₹13800 crore in FY21 to Rs 22100 crore. At the current levels, the net debt to EBITDA is around 1.4, better than the peers in the industry. The company aims to bring this down further to ₹15,000 crore in the future.

Given company’s relatively cheaper valuation versus peers, expectations for good growth in the medium term given recovery in Indian economy and infra push; balanced with expectaions of moderation in commodity prices from current levels, the risk-reward appears balanced for the stock and we recommend a hold on the stock. Key factors to watch for are the price at which the power business is divested and any higher than anticipated cooling off in commodity prices.

Stock is priced at a discount to peers

Well-placed to benefit from infra push

9 Biggest and Most Durable Omega Watches